Johnny Pfeif (also known as Jonathan Urban Pfeifer by his friends, and sometimes known as The Jonathan) is a Formling and an American celebrity and a supporting character in The Samuel Jones Show. He first appears in the seventh episode of the first season and is voiced by Michael Adamthwaite.

He is the REAL Jonathan Pfeifer, with another cloning him.

The Seriousness of the Jonathan[edit | edit source]

Jonathan, along with the Joneses, visited Ethan Johnson.

Jonathan, as a tiger, growls and attacks strangers. As a human, he is nice to everyone, no matter what they do to him.

Jonathan in the background.

Jonathan in his room. 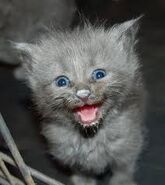 Jonathan's clone, an evil cat.
Add a photo to this gallery

Retrieved from "https://sjshow.fandom.com/wiki/Johnny_Pfeif?oldid=2105"
Community content is available under CC-BY-SA unless otherwise noted.